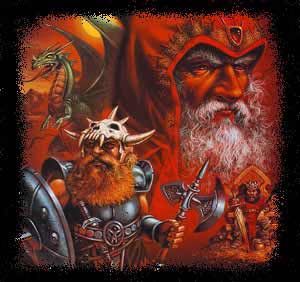 Races of the Realm

Each race in the World of Pain has distinct properties, affections, skills, and additional individualities. Here is a description of each of them.

Humans are one of the newer races to the realms. They are the result of many different variations of crossbreeding of the ancient races, and because of this, they are well-rounded physically and mentally, making them worthy adventurers of almost any class.

Although there are many generalizations made about Humans, such as that they are all arrogant, ignorant, or any combination thereof, they are a diverse race containing both the wise, the foolish, the strong, and the meek. For this reason, they do not have a great sense of family in their race and they are prone to fights, quarrels and the like amongst themselves. They also do not, as a whole, dislike or respect any other race. Humans enjoy the city life, and you will find very few living far away from it, although many of them do often venture out for conquest or to be conquered.

The Elves are one of the more ancient races. They often inhabit the woods and trees where they create their elaborate tree-houses to live in. They are typically tall, sleek and slender and can move as swiftly as the wind, as silently as a cat. They are very proud of both their heritage and their intelligence, and will die for their race and its honor. If you gain their respect, you will truly cherish your Elf-friend, for he or she will treat you as one of their own. If you make an enemy with an Elf, on the other hand, you'll surely regret it. They tend to stay away from the crowded cities, although you will see them passing through a town here or there.

The Half-Elves are the result of crossbreeding between Humans and Elves. This is usually due to Human raids on Elven villages, or the opposite. However, every now and then a Human and Elf find happiness together. Due to their heritage, they are not accepted by either race. This does not mean they are rejected, mind you, but they are merely tolerated without respect. This is very frustrating for many of the Half-Elves, and it creates a divide within the race. Some want what they feel is due to them: respect and honor, and some don't want to cause trouble, feeling it is better to do as well as they can for themselves without worrying about what others think.

Despite their less-than perfect reputation and history, the Half-Elves are a very worthy race. Employing many of the best characteristics of both Humans and Elves, they are sturdy, intelligent, and somewhat dexterous. They are also quite attractive.

Halflings are short, sometimes plump people, very much like small humans. Their faces tend to be round and broad and often quite florid. Their hair is typically curly and the tops of their feet are covered with coarse hair.

Halflings are sturdy and industrious, generally quiet and peaceful. Overall, they prefer the comforts of home to dangerous adventuring.

The Dwarves are an ancient race. As long as there has been recorded history, the Dwarves have inhabited wondrous underground caves and caverns, hoarding the valuable gems and metals they use to craft elaborate and highly valuable suits of mail, jewelry, and weaponry.

They don't often put their trust other races, and they may often seem unfriendly around strange peoples. Be careful not to mistake this for hostility, however, for if you are lucky enough to gain their trust, the bond will last as long as you live. Dwarves are short, very sturdy, and become terrifying fighters when angered or endangered.

Goblins, although disliked by many races, are not terrible creatures. They are relatively short with gray skin, and have no body hair save the fine strands on the top of their heads. They almost always grin widely, showing their sharp, glistening teeth. It's hard to tell whether their actually smiling at you out of politeness, or imagining you as their next meal.

Most Goblins are thin and wirey, but quite strong, intelligent and agile, making them superb magic users and thieves. They excel at haggling and will sit for hours to get another copper piece off the price of a loaf of bread they are looking to buy.

A bit more rare than their related species (Goblins), Hobgoblins tend to be bigger, stronger and more intelligent than their distant cousins. They are not as agile, however. A dominant Hobgoblin will often be seen leading a horde of Goblin troops. They're just about as ugly as Goblins.

Kobolds are a short subterranean race, often involved in mining. They have tough, protective scaly skin and a prehensile tail. Small, horn-like ridges cover their heads, and their ears are long and pointed.

Despite their service to most communities, Kobolds are still looked down upon and treated harshly in many areas, especially by Gnomes. This may be due to their complete lack of table manners and the like, giving them the appearance of a sloppy, ignorant, uncivilized race. They are quick and pretty tough, making them good thieves.

These ugly brutes make fierce warriors, either bare handed or with weapons, with fists averaging above the size of your typical human head. Their short temper can easily be triggered by even minor taunting resulting in deadly brawls. They're also not too smart, so they might not know the difference between a joke and an insult.

Possibly once Humans, Orcs have been twisted and demented by evil forces. They are often unwelcome in the cities and towns of the civilized folk, and are repeatedly ostracized wherever they go. For this reason, they treat their mountainous caverns and tunnels like the Humans treat their cities, rarely leaving them without specific purpose. They are very strong, sturdy, and quite quick, but lack when it comes to intelligence and wisdom. They are ruthless fighters.

Trolls are huge, ugly, and powerful beasts. When it comes to physical destruction, they are one of the most feared races around. However, they have gained respect in many places, due to their trustworthiness and willingness to give their lives for those they care about. They are truly awesome fighters, but magic is out of the question due to their low intellect. They do not make good thieves either, for despite their strength, they are quite slow. They have incredible night vision, unmatched by any other race, but when the sun comes out it becomes increasingly difficult for them to see.

Gnomes are small and weak, but incredibly intelligent. Their minds are filled with the lore and history of the realm, and are often hired to perform the more mentally advanced tasks that need to be performed. They often reside away from the "big folk," however, and therefore often need to be sought out when needed. They are of little use in melee, but are very powerful wielders of magic.

The Wolfen are a large, humanoid race. They are covered in fur from head to toe, and have large, dog-like noses. You will find them all over the realm. They are often guards in cities, or sometimes savage beasts wandering alone in the forest. They are not very intelligent or wise, but they are strong, quick and they regenerate themselves fast. This makes them very formidable fighters in almost any situation.

The Wraithen are a unique race of shadow beings. It is beleived that they are the result of a great sorcerer who was meddling with the great powers of the shadow realm and converted his test subjects into beings that exist partially between the two realms.

The Fairies are a tiny, mischievous race. They are very slender and have wings on their back allowing them to fly. They enjoy playing tricks on other races. This includes anything from casting little annoying spells to dirty deeds that can be much more severe. They are not violent, mind you, but they will unleash much more vicious spells when attacked. They are very wise and intelligent, but because of their tiny size, they cannot boast much strength.

Troglodytes are an ancient race, created through crossbreeding of dragons and the now-extinct Krovlins. Crossbreeding occurred often between the two in the hopes that a powerful breed would develop. Eventually the dragons and Krovlins became irate, and began warring. The cross-breeds, caught in the middle of the chaos and frowned upon by both races, fled to several remote islands.

Due to rampant inbreeding, nearly all of these beasts died on the islands. However, on one of the islands, the inbreeding caused severe mutation and produced the race now called the Troglodyles. The Troglodyles are asexual race of blue-green color, with huge mouths and formidably sharp teeth. They are quite strong and healthy, with average intelligence. They are almost always disgustingly ugly.

Changelings are humanoid figures and are often mistaken for ugly humans. Shapeshifter is a derogatory term often used by solids to refer to a changeling. It is not certain if this is simply out of fear of something different or bad experiences. They are capable of changing form through concentration, but there is no sure way to tell which form they may take on. The changelings are do not have any general statistics, for they change as they change shape. No one is sure where these creatures came from and no one can ever be sure if they are staring at one or not.

Stats are not static.

Little is known about these humanoid felines, except that they posses the natural agility of cats, while the intelligence and form of humanoids. They were once worshiped as Gods in the deserts.

Ghouls are ghastly beings created by evil forces. They have a terrible apetite and must eat almost constantly to regenerate their rapidly decaying form. They are never thirsty and corpses provide the best source of their food intake to slow the degeneration of their bodies. Their stats are not as random as most other races are and tend to stay at certain levels.

They may also sometimes bite the opponent they are fighting.

Often regarded as a myth or legend, Vampires actually do exist! These creatures are said to be undead beings that roam the night and feed upon the blood of the living. They tend to view other mortals as their prey. They possess great agility and a generally pleasant appearance.

© World of Pain, All rights reserved.